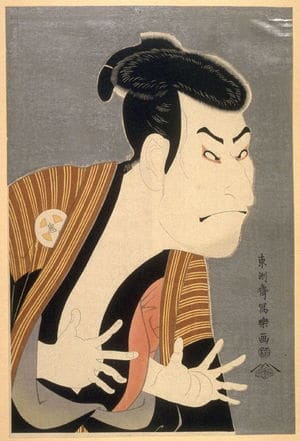 Hello everyone and welcome to my article on Yakusha-e. In this article, I will talk about the meaning of the word Yakusha-e, his etymology and his history, then I will present the main artists of this sub-genre of Ukiyo-e.

Yakusha-e is a Japanese art sub-genre of Ukiyo-e which depicts kabuki actors; Ukiyo-e describing kabuki actors often as portrait or during their play in theaters, behind the theater scene and in extravagant poses.

In Japanese the word “Yakusha-e” is written like this:
役者絵
As you can see this word is composed of 3 characters (3 kanjis):
When we translate this Japanese word into English:
Actors prints

A meeting point between Ukiyo-e and Kabuki

During the Edo period, Kabuki was one of the biggest entertainment in urban life. In large cities such as Edo (now Tokyo), Osaka, and Kyoto, many Kabuki troupes performed almost always in one place.

The growing popularity of plays has led to the development of the genre of play-related prints. Prints in unique styles related to the performance, such as posters, performance schedules, and programs, were published, while prints depicting the actors themselves became popular. 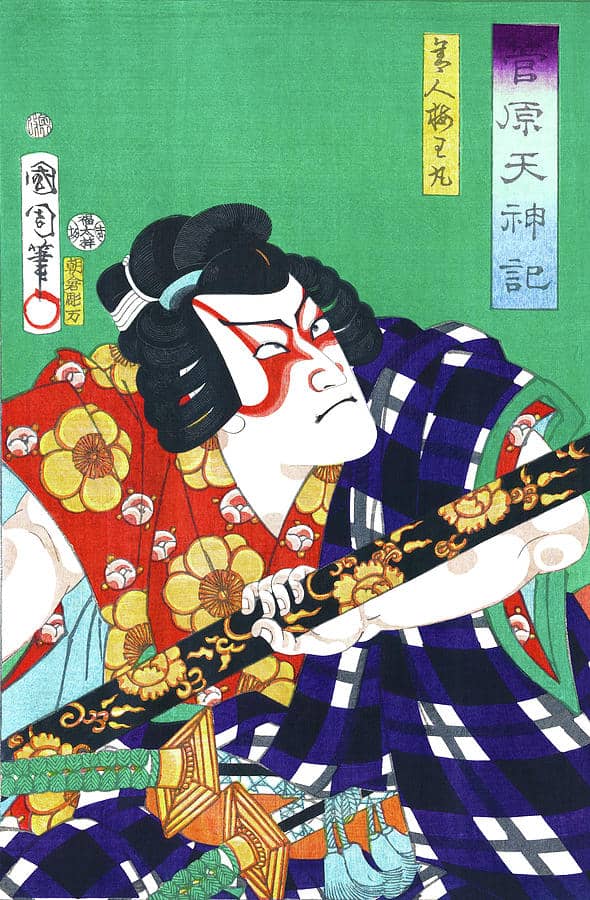 Like the geisha (whose was also depicted in bijin-ga), the actors were fashionable creatures. The viewers’ interest was focused not only on performance of various roles, but also on the appearance of the actors in the dressing room and behind the scenes.

Flourishing of Yakusha-e and the Torii school

From the end of the seventeenth century to the beginning of the eighteenth century, the Torii school flourished. The leader was Kiyonobu Torii (1664-1729). Torii painters, with Kabuki as their main theme, drew a single actor and published woodcuts (programs, performance schedules, etc.) related to the playhouse.

Torii painters actively used new techniques of woodblock printing (beni-e(pinkish rose color) and urushi-e(lacquer)). Among the disciples of Kiyonobu Torii, Kiyotori Torii (1694–1716) and Kiyomitsu Torii (1735–1785) are the most famous.

The painters of this school created a unique style of drawing a single figure, or two or three actors, in a “striking theatrical poses” for a play on a neutral background. The important thing for the Torii painters was to convey the atmosphere of the playhouse and to depict the actors performing the climax of the play.

An isolated entity in the history of Ukiyo-e is Toshusai Sharaku (active period 1794–1795). From the studio of the famous publisher, Jusaburo Tsutaya, over a few months, more than 140 paintings of Kabuki actors in various roles will be published by the artist.

Later, Sharaku suddenly disappeared. All of his works were outstanding. By consciously exaggerating and distorting the intense peculiarity of grotesque, proportions, gestures, facial contours, etc., he created a rich expression that can be compared to a human figure. 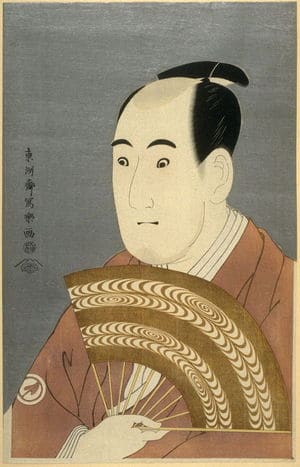 A mysterious genius painter, Toshusai Sharaku, created an actor-painting style that intentionally exaggerated the face and completely changed the Yakusha-e’s painting. It is the actor’s own face, not the role drawn, that peeks from under the thickly painted stage makeup.

(The Fourth Matsumoto Koshiro as a Man Standing on the Bank of a River, by Katsukawa Shunsho)

The first is a portrait of the actor against the backdrop of the stage curtain in a static pose, viewed from the front, and the second is the actor behind the dressing room, which is an intimate settings. Attempts to see the world of actors behind the mask of stage make-up were made by other painters of the Katsukawa school (Katsukawa Shunshō, Katsukawa Shunei) and their contemporaries. 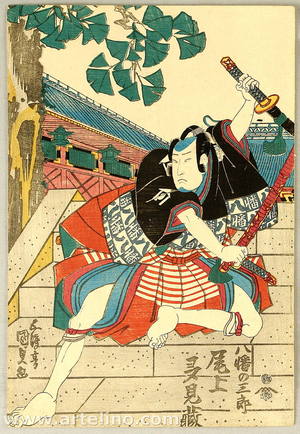 (Showing Off on Staircase – Kabuki, by Utagawa Kunisada)

When you do an article about ukiyo-e and there sub-genre, you have to check if Hokusai did try it or not. And in most cases, he did. Therefore, I will present some of Hokusai Yakusha-e, kabuki actors ukiyo-e, art.

In the summer of 1779 Hokusai published a series of portraits of Kabuki actors, which he signed with the name Katsukawa Shunro. “Shunro” is one of the numerous names adopted by Hokusai in his lifetime.

Torii Kiyonobu I is said to have been one of the founders of the Torii school of painting. Kiyonobu was recognized as an important artist of the time with a unique style. Kiyonobu was in the marketing business of the time, he was creating billboards and other promotional material for the Kabuki theaters. Therefore, their creation needed to attract the eye, the attention of the passer-by. So, Kiyonobu’s style became bold, exuberant in color and thick lines.

At the beginning of the 18th century, Kiyonobu was an accomplished and renowned artist. His work was praised and even used as offering for Shinto shrines, which suggest the quality and emotional impact of the art on the people at the time. 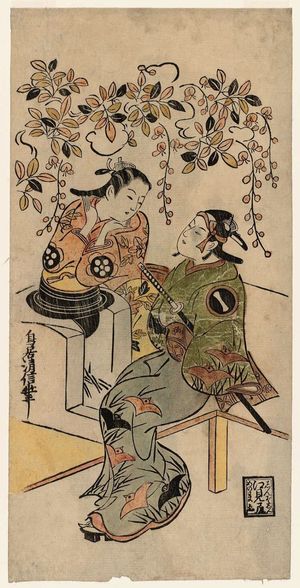 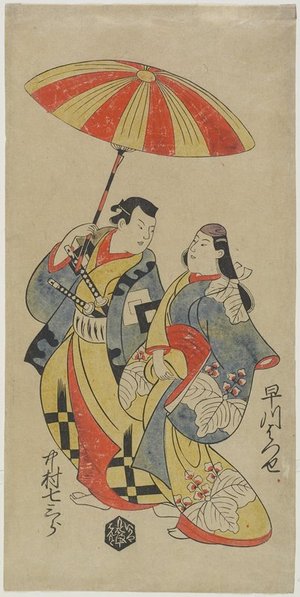 Torii Kiyomitsu was the third head of the Torii school. The critics of his ukiyo-e would say that his kabuki prints are lacking originality, yet still contain the dream like beauty of the actors. It is said that the Torii school did well under his management without any innovation or change to the “Torii style”.

In his section, I will present some of Toshusai Sharaku’s kabuki actors ukiyo-e. And Yes, he is the guy which has drawn one of the most shared kabuki actor ukiyo-e in the western world. 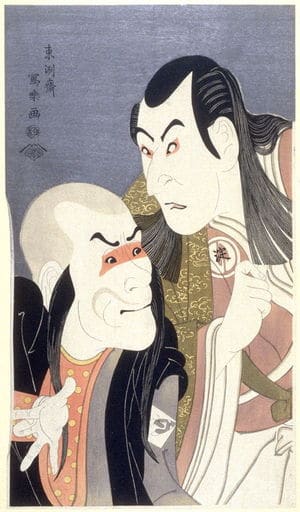 He was known as Miyagawa Shunsui before cahnging his name to Katsukawa shunsui, he is the founder of the Katsukawa school and style. He taught Katsukawa Shunshō. 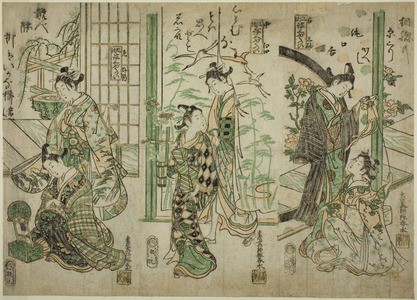 (A Triptych of Fashionable No Plays)

Katsukawa Shunshō, a prolific artist in the Katsugawa school

Katsukawa Shunshō was the leading artist of the Katsukawa school. Shunshō was a disciple of Miyagawa Shunsui. Shunshō is most well known for introducing a new form of yakusha-e, prints depicting Kabuki actors.

Shunsho drew kabuki actors with a large head style, but also inside their dressing rooms which was a new perspective for the consumer to see their favorite actors in settings other than their role. When drawing the portrait of kabuki actors, he also used realistic depictions of their faces, which made the consumer able to recognize their favorite actor.

(Ichikawa Danzo III as a Samurai Drawing a Sword) 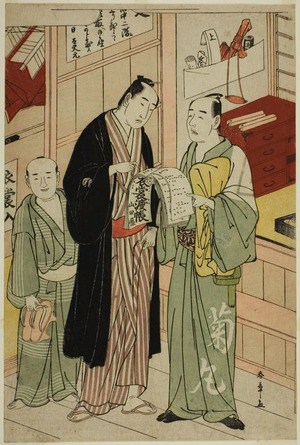 (Onoe Matsusuke I in the Wardrobe Room of a Theater)

Utagawa Toyokuni, propulsion to fame of the Utagawa school

After being the disciple of the founder of the Utagawa school, Utagawa Toyokuni became his successor. As the second head of the school, he moved the school to a position of renown, fame and power through the 19th century. 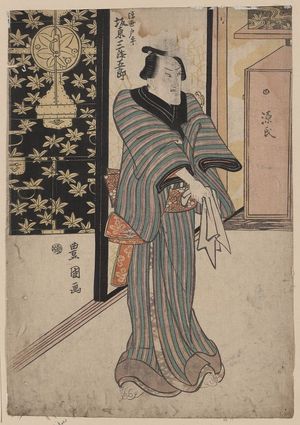 (Bando Mitsugoro in the role of Ukiyo Tohei) 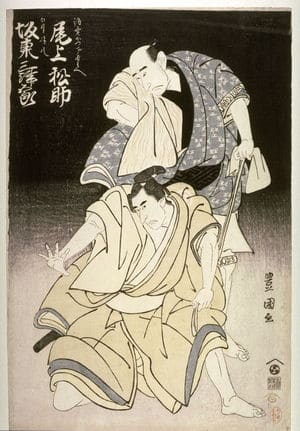 Utagawa Kunisada, the pinnacle of the Utagawa school

Utagawa Kunisada, also known as Utagawa Toyokuni III, was a very famous and successful ukiyo-e artist of the 19th century. It is even said that in his life time, he was even more famous than Hokusai or Hiroshige and Kuniyoshi.

Kunisada was Utagawa Toyokuni I disciple, he was taken under his wing at a young age after Toyokuni saw his early sketches. In 1809, he was sited as a “Star attraction” by others contemporary writers of the time, then he was considered as good as his teacher Toyokuni.

Kunisada was an avangardist of his time, and always popular with the public, he always worked on his own style and evolved in time, sometimes with hard turn. He also didn’t take care of the constraint of his contemporaries.

It seems that he was really passionate by his work and/or a workaholic, because all his work has been cataloged and it represent an impressive amount. He produced around 20,000 and 25,000 individual designs for ukiyo-e in his lifetime. 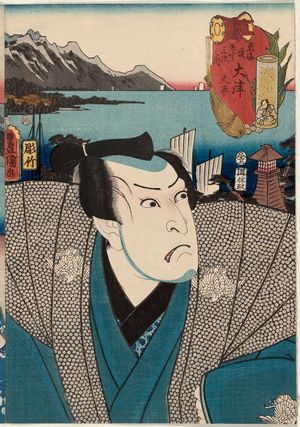 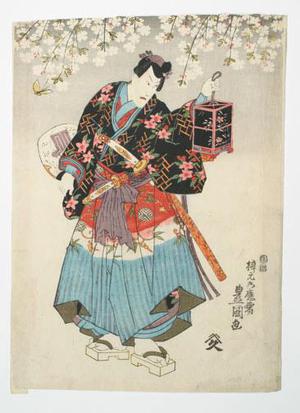 Here you have it, I have presented to you some of the Yakusha-e artist. But, there are a lot of them out there, therefore, I have hand picked today’s list. I hope you enjoyed it.

Deligne Mathieu is a young artist with the objective to master the art of drawing Ukiyo-e bird and flower (花鳥画 – Kacho-ga).